Member of County Assembly for Dadajabula ward Adan Bunow Monday September 27th,2021 hosted a heavy delegation led by Wajir governor H.E Ahmed Muktar during the commissioning of Dadajabula water Piping Project. It was pomp and dance as the project was welcomed by the community in the hour of need, a time when the county is facing challenges of devastating drought.

Mr Bunow Speaking at the baraza said “Today I am fulfilling one of the biggest campaign pledges I made to the electorate during the 2017 General Election to ensure the water piping project is done to stop innocent mothers walking with donkeys or carrying jericans on their backs as they fetch water from a distance”.

The Mca further stressed that as one of his legislation roles he has diligently represented the interests of the electorates in the house.

Elders, mothers , youth and the politicians who spoke at the event applauded Mr Bunow’s development initiatives and urged the lawmaker to further implement more development projects in the few months remaining ahead of 2022 polls.

Mr Bunow thanked the county government led by the county boss H.E Ahmed Muktar who has seen the implementation of the project which was successfully launched today. 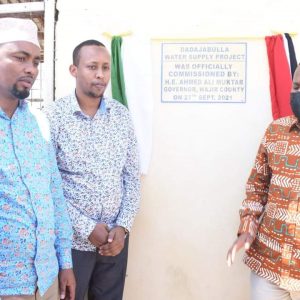 The Dadajabula water piping project will act as the biggest Legacy for the re-election bid of Mr Adan Bunow in 2022 General Election.