The forum was the climax of Garee Unity Pact earlier held behind the scenes.

The Community’s key priority areas discussed in the high powered meeting included and not limited to unity pact, establishment of a nine-member community leaders committee known as Ugasins, and to vote as a block in elective positions from governor down to Mca.

The nine nominated members by the clan are drawn from different sections of the larger Garee clan. One religious leader is independent while the council members were picked fairly from (Tuff,Quran, Furkesha and Asare)  as a sign of pure unity.

Later after the eight-hour meeting the community invited members of the Fourth Estate to a press conference where it was confirmed the community’s top issues discussed were factual and therefore should be made public through the press.

In an interview with Arf Media Mr Abdinasir Ahmed said “This program was coined two years ago and today has successfully been held with the help of Community members”.

Mr Abdinasir further stated that the Garee Nation is in the eve of electioneering period and therefore determined to back those vying for the top three seats of Wajir County Governor, senator and woman Representative. This will be achieved if they vote as per the wish of the community’s political realignment.

“Our vote is in one basket and we will never be divided” Abdinasir said.

In a statement Abdinasir said Garee Community was not a corner tribe being number four after Degodia, Ogaden and Ajuran.

The Nine Garee Council of Ugasins is composed of the supreme leaders in the community who will provide guidance on the political direction, social and economic affairs.

The council further confirmed that they will work with other leaders from different clans in Wajir to be part of the next County Government that will be the face of Wajir.

Garee is a nation known during electioneering period as it ensures the community always vote as a block in respect of the council’s decision.

The community stated that it welcomes any candidate from Wajir county so long as one meets the community’s 2022 political alignments.

In the press conference the Council members send a strong message to the communities living in Wajir to live peacefully and coexist.

The elders said interests of Wajir County are more Important than individual ones. They urged the Wajirians to elect leaders who will unify all the communities and change the face of the County. 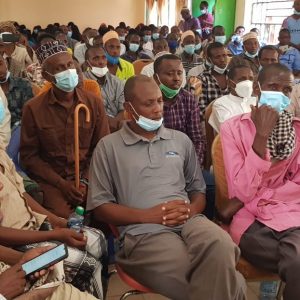 The Unity Pact agreed by the Garee Nation a head of August 9 General Elections is a good move to address tribal or clan animosity.

Yussuf Rafiki: The interest of Darawa Nation is above me my withdrawal from the race is a unifying factor