The success of the project was due to his office working jointly with Water Sector Trust Fund, the MP confirmed.”

My office in partnership with the Water Sector Trust Fund has today Commissioned and delivered the riba water and sanitation project in riba, wajir east constituency that was one of my campaign pledges to implement water supply and sanitation for underserved rural communities”, he said when he handed over the project to the locals.

The legislator conveyed gratitude to water sector trust fund for their financial support in implementing Water and sanitation projects at Konton, Boji Garas, Handaki, Khorof harar Sub-County and Solarisation of boreholes in wajir rural east through their european Unuon-share and MTAP 1 and 2 Programmes.

The lawmaker commonly referred to as RK outlined the activities of the project which include fabrication and installation of 15M Elevated 50M3 steel tank, Installation of a 4.4km pipeline extension and construction of 1No.2mx2m closed Water kiosk.

The Project has also seen construction of 2 No.9M long cattle trough, rehabilitation of a 10m high elevated 50m3 steel tank at Riba Water Supply as well as installation of 2No 200M fence at the Borehole 1 and 2.

Installation of Solar pumping system at borehole 1and 2, installation of 100 prepaid meters (Household) and chambers are also other work done by the massive water project, the MP added.

This project, RK said comes as a great reprieve to the people of riba and it’s environs at large who have borne the brant of drought and lack of access to clean water and sanitation.

“The water project will reduce the daily burden of water collection that falls on women and children”, he said noting that the incidences of Water related diseases will decline and local farmers will be able to increase crop production. 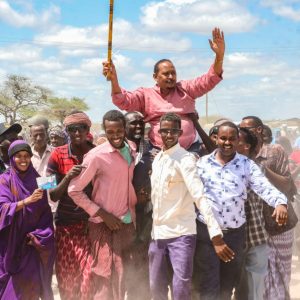 Speaking to the mammoth crowd who attended the event RK said his first assignment in riba location was to bring mobile provider Safaricom network close to the people who previously used to go to wajir to talk to their loved ones.

“Riba was then a dark place but after I installed a mini grade solar project the people of the area are enjoying fully pledged light systems where business is booming and people are watching news and improved security in the town”, he said.

RK said riba town never had a secondary school but through his initiative there is the first girls secondary school and students are accessing education unlike before where they used to go to other sub counties for secondary education.

The MP termed the projects as his biggest lagacy is the newly sub county of khorof harar that was commissioned recently to bring services closer to the people. He said before this people of riba had challenges in accessing national government services like birth certificates.

RK added “Your daughters and sons will be recruited from Khorof harr sub county either as police officers, prison wardens and Kenya Defence Forces (KDF) and that is the biggest development”.

“Nimetenda na nitazidi kutenda- (I have implemented and handed over to the people. I will continue doing more)”, RK concluded his address which was met with jubilation and ullulation.