The Department of Agriculture Livestock and fisheries has launched a new Modern Meat processing facility. The department has also renovated Makaror slaughter house.

The Prongram is called EU IDEAS and has been funded by European union. The EU has shown commitment towards assisting Livestock farmer in marketing their products.

The New Modern Meat Facility will go into helping Meat Vendors on the hygienic part and given new skills of meat processing that will ease work for the meat market.

Wajir County is identified as one of the largest among the Pastoralists Counties that have many livestock like Camel, Goats and Cows.

With an International Airport Wajir County has the capacity to transport meat to the Arab Nations and World at large because of large capacity of livestock production.

The Department also renovated and refurbished the Old Makaror Slaughter house to an advanced standard making the largest slaughter house in the County.

Inside the slaughter house the hygiene is now guaranteed unlike before when Meat Vendors were burdened during the rain season as they use to have a rough time. Now the Department has assured all those challenges faced by the Meat Vendors in Makaror slaughter House has now been resolved for good.

The Department also Constructed a new Camel Meat Facility and also initiated a training session for the meat Vendors on how to use the new meat equipment as well as maintaining hygiene and how they can use the machines. 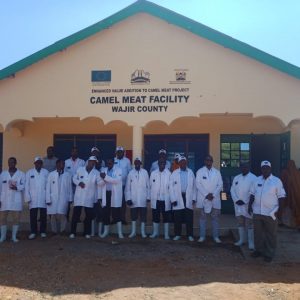 Nyirinyiri is one type of meat that is loved by members of the Somali Community, but Mothers who prepare those meat lack basic skills and hygiene of which the Department of Agriculture has heavily invested on it.

As a result Nyirinyiri mothers are the biggest beneficiaries of the new Modern meat Facility.

After the launch of the new facility the department gathered at its headquarters and addressed the meat Vendors as well as County Government staff, CEC and CCO. Representatives from the European union who provided funds for the project graced the event.

Mr Ahmed Sharif Bulle the CEC in charge of Agriculture Livestock and fisheries said “First we greatly thank the European union which supported us with funds to modernize the facility. I want to assure them that this will be useful to Wajir people”.

Mr Bishar Adan Emoy Chief Officer, Department of Agriculture said the Meat Vendors now have a great chance and something to celebrate since there is a new Facility for them following the renovation of Makaror slaughter house.

He urged the Meat Vendors to use the equipment well and avoid damaging it since its costly when it comes to repair.

Mothers who venture in meat Business in Wajir are looking for it’s success out to sustain their daily bread, pay School fees for the children and use it as a source of income.