Raila Odinga join Leaders from Wajir North in endorsing the candidature of Jimal Abdi for Batalu By-Election on ODM ticket.

It is less than two weeks before the Batalu By-Election and candidates aspiring the seat are on high campaign blitz in an attempt to win during the elections scheduled for December 18, 2019.

And the campaigns reach homestretch, It’s now official Leaders from Wajir North, Elders, Youth and women have Unanimously thrown weight behind ODM Flagbearer Jimal Abdi Hassan since he was the choice of the people in the 2017 general election.

Speaking to ARF Media Jimal who jetted back this Morning from Nairobi after he attended the Bomas meeting and witnessed the unveiling of the BBI Report confirmed that Wajir North MP Ahmed Abdisalan, Wajir Women Representative Fatuma Gedi, Adan Ismail representing Bute ward,Nominated Mca Maimuna Said and other delegates paid a courtesy call to Rt Honourable Raila Odinga at his Capital hill office where he was introduced and all agreed to support him. 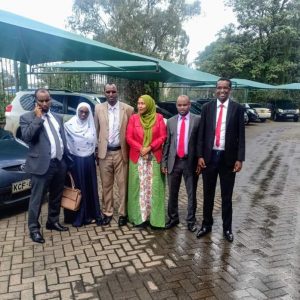 Jaimal said after the meeting, the ODM leader agreed to put strategies in place in spearheading his campaign.
“I can confirm confidently that Baba is behind me and he assured me that I have his blessing and as well as that of the party. I am sure I will win this By-Election”, he told ARF Media.

Jimal expressed confidence more than he had in 2017 elections noting that the style and campaign trail during this By-Election has become more modern now with the support of the ODM Party Leader the Rt Honourable Raila Odinga, leaders of Wajir North, Elders, youth and women who are now fully supporting him.

Jimal who is well learned and previously worked in different Government institutions at different capacities is seen as the man who will change the lives of the people of Batalu ward when elected as their representative.

With a rich manifesto Jimal said his interest is to serve the people. “Before I Joined Politics I used to earn a lot of money but since I have been endorsed by the elders to vie and bring change to the people of the Batalu ward, I have accepted the endorsement”, he added.

Jimal promised that his Leadership will be fully involving as well as a just and honesty Leadership that will serve people. He urged the electorate to vote for him assuring not to discriminate those who will not vote for him. He also urged all the people of Batalu ward to maintain peace during the campaign period and during the election.

Following Jimal’s endorsement, he is now rated the front-runner in the ward By-Election and his win could be a gone case.

Vanity In Kenya Politics as fight for Presidency is not a walk in the park, Aden Duale tells Cs Matiangi and Ps Kibicho