A heavy Convoy of more than 25 vehicles earlier today made it’s way to Buna town in a campaign blitz in the impending Batalu Ward By-Election led by ODM Cadidate Jimal Abdi Hassan. He was accompanied by MCAs, Elders, Professionals and Supporters.

The Supporters who were waving posters praising the leadership of Jimal Abdi Hassan waited at Malkagufu town led by more than 70 motorbikes. This crowned the style in which the convey entered Buna town with song and dance in praise of ODM candidate.

And immediately the convoy entered the town, it came to a standstill with the crowd chanting Jimal Juu Juuuu. the style Jimal entered the town made it look like a presidential rally.

Independent Electoral and Boundaries Commission (IEBC) has set the by-election to be held on 18 December 2019. Jimal filed a successful petition challenging the election of Noor Ibrahim as MCA for Batalu Ward during the 2017 general election.

Wajir Magistrate nullified the election on February 2, 2018 and ordered for fresh elections to be held as per the law, but Ibrahim appealed the verdict in the high court based in Garissa which later dismissed it. He then moved to the Court of Appeal and Supreme Court of Kenya which upheld the magistrate’s decision thereby precipitating the impending By-Election.

After fighting a prolonged petition which he has finally won Jimal is seen as a frontrunner in the By-Election of Batalu Ward which has made many people rally behind him. 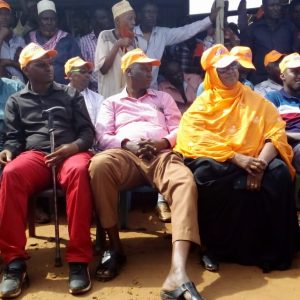 The detailed campaign Manifesto Jimal launched today was welcome by the Locals who expressed hope that they will benefit from his leadership.

Jimal further promised that through his leadership communities living across the border of the ward will be treated equally for unity to be achieved.

Jimal promised to listen and address grievances of the electorates especially when there are disagreements. The development of ward shall through consultation endorsed through public participation that will create inclusivity in the ward, he further assured.

Jimal said bringing people together and sharing resources equally will remain the backbone of his leadership.

The ODM aspirant urged the people to come out in large numbers during the election day. He appealed to all communities residing in the ward to vote peacefully.

Saying Elections are held in one day, Jimal noted that what remains to be maintained is unity and brotherhood of all the people.

The MCAs threw weight behind Jimal and urged the Electorates to vote for him during the December 18, 2019 By-Election.