Govt, World Bank give 106 Scholarships to Vulnerable Form One Students in Wajir

Elimu Scholarship 2020 is an initiative funded jointly by the Kenya Governnent and World Bank through the Ministry of education that seeks to improve secondary education under Secondary Education Quality Improvement Project (SEQIP).

There was face of hope among the beneficiaries today after Equity Bank Wajir branch released the final list of successful 106 students who sat last year’s KCPE whose education is going to be sponsored by Elimu Scholarship.

It was at 9am when the benificiaries drawn from six sub counties were unveiled before their parents and Equity staff members from Wajir branch led by Branch Manager Mr  Shadrack Muithya at Wajir Girls Secondary School. The meeting also discussed the way foward after the selection was done and released to the public.

Equity Bank has been contracted by the World Bank since the bank is qualified in matters of scholarship through the Wings to Fly Scholarship Programme. The Bank has successfully implemented the Scholarship undertaking thereby gaining confidence from foreign donors including the World Bank. Through the Wings to Fly Scholarship, thousands of vulnerable students have successfully completed their Secondary Education courtesy of Equity Bank.

Students chosen to benefit from Elimu Scholarship programme include orphans and vulnerable children; or candidates from vulnerable communities in the target sub-counties. Candidates from urban centres with informal settlement or candidates whose parents/guardians are living with disabilities, extreme poverty, suffered neglect, abuse and have no support to continue with their education are also considered for the Scholarship.

The face and expected change of lifestyle of the young Girls and Boys who have been given a new lease of life by the Kenya Governnent and World Bank presented their overwhelming joy and happiness through the naration of poems as they congratulated the sponsors of the Scholarship Programme.

Speaking to Media as the function progressed Mr Shadrack Muithya thanked the Kenya Government and the world bank for making the dreams of the young Girls and boys come true by funding their ambitions of pursuing Secondary Education. The manager confirmed that 106 Candidates were selected assuring that their Education will be fully sponsored for the four years in Secondary Schools. 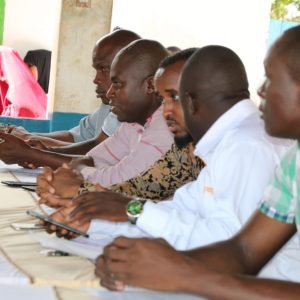 Parents and the students who spoke with the media also expressed their joy and happiness.

The parents and guardians who welcomed the Scholarship programme whole heatedly said it will go a long way in addressing Girls child education particularly reducing early marriages and defilement cases.

'Negotiated Democracy' has outlived it's use in NEP Counties