Leader of Majority Party in the National Assembly Aden Duale today joined others leaders in Garissa for a meeting convened by Governor Ali Korane to discuss security threat as a result of escalating cases of terror attacks spearheaded by Al shabaab.

The meeting brought together political leaders, clan elders, religious leaders, women, youth and professionals to discuss ways and strategies in collaborating with the national security agencies in the fight against terrorism.

Duale welcomed the initiative of bringing all stakeholders on board in the fight against terror attacks by Al-shabaab which now threatens the country’s security.

“In the recent months, several lives of civilians and security forces were lost, schools and health facilities closed, Communication Infrastructure disrupted and as a community we have decided that we shall join forces with the security agencies in combating Al-shabaab in all its forms including it’s cells in the region”, said Duale.

“We shall share and implement the recommendations of this high level community security meeting with the National Government security apparatus in due course”, he added.

He supported President Uhuru Kenyatta’s decision of sending special security forces to ruthlessly deal with terror gangs and asked communities in the terror prone areas to work with security agencies.

As political leaders from these communities we shall commit ourselves to support the national security interest of our country, stressed Duale. 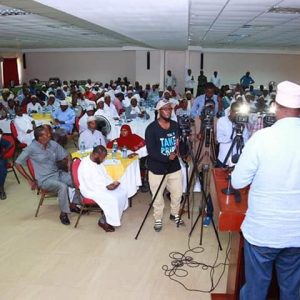 He noted that when NEP is safe, Kenya will be safe from the enemy and evil forces.

In attendance during the security meeting included Garissa Senator Yusuf Haji and all Members of Parliament from the region.