Aden Duale, Jubilee’s third in command, takes time off to care for livestock this Recess Period.

Aden Duale relaxes in his Camel Farm when Parliament is on recess a proper description of why the man who is Third in Command values Livestock.

When Parliament of Kenya takes a break during recess MPs retreat to their respective constituencies where they busy themselves with service delivery to the electorate.

For Aden Duale who is the Leader of the Majority Party in the National Assembly and Third in Command, this is the time he visits his Camel Farm named Libahlow in Balambala Constituency besides having tight schedule of interacting with his electorate. He gives some time in looking after his livestock.

Generally Duale has serious love with Camels and that is why he has heavily invested in the Farm despite keeping Goats and Cows.

When he is at the Farm Duale knows which Camel, goat or Cow is sick and when they need treatment particularly this time when there is plenty of pasture brought by rain before the area becomes dry.

Even before he joined Politics Duale used to have Camels and devoted serious attention being a Somali Pastoralist.

While at the Farm Duale gives much time to concentrate with the whereabouts of the Camels and avoids anything that distructs him especially phone calls so that he has a good time for his livestock.

In the Farm Duale also takes fresh Camel Milk which he milks using his hands and consumes immediately. Camel milk has been medically proved as very good in health. 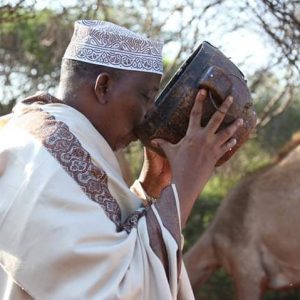 Generally Somalis are a Pastoralist Community with rich touch in livestock which they keep to sustain their livelihood. A lot of their concentration is devoted on Camels because they are expensive and 90% of Somali Professionals, their Parents pay school fees through sell of them and other livestock.

During the drought season it is the worst time for livestock keepers since they lack adequate pasture and water. They are forced to use water tracking method which is costly. But now water and pasture is plenty after the current rains which have been adequate.

For Duale, despite his leadership position being unique, how he values livestock portrays him differently.

He is the only leader in the entire Pastoralist Community who shares his pictures on his official Facebook Page with livestock because of the love he has with them.

Speaking to one of the Online digital Media outlets Duale said “when i am in the farm this gives me a free stress zone where I feel good and stay the whole day looking after my Camels”.

Duale further added “At times as politicians we are very busy but I also devote good time to look after my Camels since livestock is part of our lives”.

Duale has portrayed himself as a politician who has succeeded in his endeavors be it in politics or business. He is now touted to take over the Prime Minister’s position when the Building Bridges Initiative (BBI) report is implemented and the position of Leader of Majority Party in Parliament is replaced by that of the Premier.

'Negotiated Democracy' has outlived it's use in NEP Counties